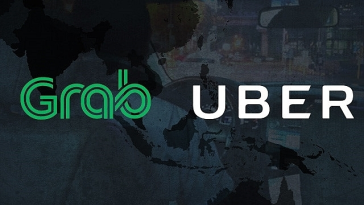 For people who can’t drive, people who do not want the trouble of finding a car park, people want to go out for lunch and people who would miss the last train (thanks to OT), Grab and Uber would be a staple app in the phone. According to The Edge Markets, Grab itself offers 3.5million rides a day which shows how reliant people have become on ride-hailing services compared to the traditional taxis.

I won’t talk about why the merger happened (you can read more here and here) but rather I want to focus on the market implications of the merger. Indeed it as raised red flags amongst Competition Commissions in Singapore, Vietnam and Philippines about what the implication of the merger will bring as it will be a monopoly in the region. Unfortunately, Malaysia has yet to have merger controls in place as the recent Competition Act focuses on dominant players and anti-competitive practices.

If all goes well and as expected, Grab would be a monopoly player in the ride-hailing market. For the society as a whole, we would want to prevent the existence of a monopoly if possible. Imagine if you could only go to Tesco for your groceries, wanting to buy a carton of milk and it costs you RM20? Sure you’ll be unhappy and unwilling to buy it but you have no alternatives, hence you plan what you can save throughout the week to afford that bottle of milk. Monopoly players might just do that, jacking up prices for their own profit gains.

Competition authorities are more cautious when approaching the topic of mergers compared to anti-competitive activities for 2 reasons:

Of the two possible outcomes, Competition authorities can only predict and make assumptions about the post-merger entity possible moves. They would have to look in the long term, such as 7 years from now, what economic benefits the entity would bring and at what cost to the society. It’s all based on speculation. This is a very onerous and risky decision just like how it is hard to speculate whether a 5-minute ride might either cost you an arm or just RM5.

How do Competition authorities come to a decision?

Currently, the test for whether mergers would affect competition negatively in the EU is the SIEC test: Will the concentration Significantly Impede Effective Competition in the common market?

The burden is on the Commission to establish that the merger is either compatible or incompatible with the internal market. In making the determination, the merger must be assessed in the context of the position that would exist were the merge not to be completed (counterfactual). The standard of proof is the balance of probabilities.

In fact, EU authorities have previously prevented several mergers such as O2/3 and Ryanair/ Aer Lingus.

For O2/3, they are both strong players in the telecommunications market which appears to be an oligopoly market. Market regulators focus on promoting competition and ensuring competition remains strenuous by keeping it fragmented. The mobile telecoms sector should be competitive so that consumers can enjoy innovative mobile services at fair prices and high network quality. The principle that efficiency claims can be put forward to outweigh any negative effects is more rhetoric than reality. Competition authorities are more prudent and cautious for merger cases and efficiencies play only a marginal role compared to the perceived negative effects.

In Ryanair/ Aer Lingus, the parties would have very high combined market shares on a large number of routes, but that the merger would eliminate competition between 2 closest competitors on the routes and that barriers to entry into the market were very high. The parties closely monitored the other’s marketing campaigns and price changes and constrained each other’s behaviour in relation to both price and other parameters of competition.

In cases where the parties are found not be close competitors, such as Facebook/Whatsapp, an unconditional clearance decision is likely. In contrast, a merger between firms which produce products with high degree of substitutability is more likely to produce anti-competitive consequence i.e. Ryanair/ Aer Lingus.

The reason for CCSS to delay the merger until May 9th is perhaps to assess either to allow the merger to pass and give commitments to ensure competition structure, prevent it and as such “Gruber” is not allowed.

But what if Uber said that because it keeps making losses hence selling off the SEA entity was to improve its business?

This is also called the “rescue merger” where a firm takes over another to prevent the latter from “failing”. This defence is well established in US antitrust practice where it seeks to give a “second chance” involving a firm which would face an inevitable liquidation. There are various advantages for this such as to protect all stakeholders, creditors, employees, and the economy. This approach is seen to be involved with distributive justice instead of focusing on efficiency gains by forcing a loss-making company to stay alive for the benefit of competition at the expense of others.

However, there are 3 criteria which the authorities will consider:

Note that this is a “last resort defence” and should be assessed very strictly to prevent abuse. Companies may record losses but have valuable assets such as Twitter and Instagram.

In Aegan/ Olympic II, the Commission approved it unconditionally accepting that Olympic was a failing firm and would be forced. The ongoing Greek financial crisis meant that domestic air travel would drop drastically. Absent the merger, it would leave the market completely and the merger would have no adverse effects on competition.

In Grab/ Uber’s case, Uber has been recording losses for years especially in SEA whilst Grab has been innovating rapidly with various initiatives. Uber, with various protocols and guidelines, has been said to lose to Grab due to lack of local preference. However, the situation does not seem to be as dire and critical as Aegan/ Olympic II because they are airlines which focuses on Greece region and there is a financial crisis ongoing. In fact, just a few weeks before the merger announcement, Uber said that it would invest more in SEA region to improve its market position.

It is probable that this argument will fail if we follow EU’s merger regulations and it’s (often criticised) strict approach to competition regulation. I personally prefer Uber over Grab for various reasons but I’ll leave this to the Competition authorities.

Competition authorities would normally have 2 options if later they find the merger to be unfavourable: to unwind the merger or to assess the post-merger entity on anti-competitive practices legislation. Authorities are less likely to unwind a merger because of the significant cost involved and the structural changes to the market already caused. In the EU, once a merger is said to satisfy certain features, it must notify the Commission of intention to merge or else if it “gun-jumps”, a hefty fine can be penalised on it.

This brings us to the second option– under the Competition Act. Most Malaysian Uber/ Grab users would every now and then receive a text “free RM60 off your next 10 rides!” or “book now and redeem up to RM5 on your next ride!” but once that competitive pressure is off-loaded, would we still continue to see these rebates? According to Grab Malaysia Country Head Sean Goh, the merger would not make things any different and prices would remain the same. How much confidence or scepticism should Competition Authorities have on this statement?

Analysis of anti-competitive practices often takes much longer than preventing a merger. The previous may require months of overseeing, various economic theories and it is less obvious. For the latter, it’s all about speculation (and common sense), goes to the root of the problem instead of just plucking the weed and the Commission makes a judgment much faster than anti-competitive practices as businesses want finality and a decision fast before either party changes their mind. As mentioned previously, once a merger goes through, the damage is done. Catching them after the merger is definitely possible, but one that is less preferable than stopping it before and takes more time.

Personally, I don’t look the merger in a favourable light and 120% sceptical about the merger. My reasons are as follows

When I was in the UK and Uber was the dominant player, Uber rarely ever had any promotion, discounts or rebates like I’ve been receiving in Malaysia where it’s almost every other week that I’ll receive a text about one. As such, I can imagine the same to happen here where it’s a matter of time where Malaysians would bid goodbye to those promotion texts and are forced to pay higher prices. Without Uber to offer those promotions, Grab would similarly find no reason to give offers as well. As such, it’s just a matter of time.

2.The efficiency gains might not be able to compensate for the reduction in competitive pressure

Unfortunately, and strangely, we live in a decade where monopolies are “normal” and hostile takeovers may be an everyday affair. China is an excellent example where the whole country’s technology lies in the hanof on a few who holds a monopoly in every market. Perhaps the citizens are more patriotic and hence support local apps more than foreign ones (Didi vs Uber) but within China itself, a country with a huge economy, there are very few players in each market i.e. Alipay dominates the card-less payment, Wechat reigns over Whatsappp and Weibo is the new Facebook there. It creates a no-choice, no-second option if I dislike any of them.

I’m really not a big fan of the theory “the bigger the more efficient” theory but I advocate for “the bigger the more risky to fail” theory. The bigger the company gets, the more it absolutely cannot fail and the more the need to sustain it. Call me a pessimist but when it comes to competition, no allowance should be made and no risk left unaccounted for. Look at the Financial crisis 2008/ 2012 and it’s obvious why.