This post outlines the proposed changes to the law and its reciprocal effects  as a result of the Finance Bill 2020.

Under the PENJANA scheme, the government had introduced an initiative for both Small and Medium Enterprises (“SME”) and Limited Liability Partnership (“LLP”) whereby a tax rebate of RM20,000 is given on the tax payable for the 3 Years of Assessment (“YA”).

A SME / LLP for the purposes of obtaining this rebate is an entity which:

B.    Additional condition for the purposes of claiming deduction of expenses                incurred in relation to research and development activities

The Finance Bill proposed the addition of a new section whereby certain persons carrying out an Approved Incentive Scheme (“AIS”) activities will be taxed at a preferential rate of 20% for 7 YAs.

It was mentioned during the Budget 2021 speech that AIS activities include:

Under Section 103(2), the service of an assessment by the IRB is made payable on the date that is stated on the assessment when it is served, regardless of whether or not the taxpayer is appealing the said decision or otherwise. In other words, “pay first talk later”. This applies where the taxpayer is appealing the assessment to the Special Commissioners of Income Tax (SCIT), the prescribed relief in the Income Tax Act 1967.

The aforementioned approach may cause problems to taxpayer when faced with the impossibility of payment of the additional taxes within a very short period of time (commonly 30 days within the date of assessment). An alternate relief mechanism taxpayers often plead to the High Court for a stay order vide a judicial review application. The effect of such order, if granted, is that the taxpayer is allowed to withhold payment of the assessment until the disposal of the case, or as prayed.

The introduction of this section appears to frustrate such circumstances. Section 103B makes tax payable under the Income Tax Act payable notwithstanding the “institution of any proceedings under any other written law”. The words “other written law” would be referring to the Rules of Court 2012 where the roots of judicial review are entrenched in.

Presently, there is no statutory definition of the word “plant” within the Income Tax Act.

Our Malaysian Courts have therefore been applying, inter alia, the definition in Yarmouth v France that a plant “includes whatever apparatus is used by a business man for carrying on his business” in the context of the industry operating by that taxpayer.

The word “plant” is proposed to be defined as “an apparatus used by a person for carrying on his business but does not include a building, an intangible asset, or any asset used and that functions as a place within which a business is carried on”.

The effect of such a definition is that it negatives cases such as Tropiland (car park building), CIMB (database) and Infra Quest (telecommunication tower) for the purposes of claiming capital allowance.

However, of particular contention, is the effect on PU orders gazetted pursuant to Schedule 3. For example, the PU(A) 274 – Income Tax (Capital Allowance) (Development Cost for Customised Computer Software) Rules 2019 provides for the initial and annual allowance for customized software under Schedule 3 of the Income Tax Act. The new definition will have a residual effect on subsidiary legislation and thereby making certain PU orders redundant as subsidiary legislation cannot override the principle legislation.

For companies which had exhausted their period to claim Reinvestment Allowance in 2019 or prior YAs, the proposed amendment allows the taxpayer to claim an additional period of 3 YAs, up to YA 2022.

For companies who will exhaust their period to claim Reinvestment Allowance in 2020 or 2021, the proposed amendment allows them to claim an additional 1 / 2 years respectively, up to YA 2022.

i) the surrendering and claimant company owns 70% (either directly or indirectly through a third company) of the other’s share capital; and

ii) the surrendering and claimant company is owned (directly or indirectly) by a third party company.

Where the situation falls under (ii), it is proposed that the third party company ought to be a Malaysian resident company.

The proposed Section 113B makes it an offence where a company fails to furnish contemporaneous transfer pricing documentation.

The penalty for an infringement of this section is a fine not less than twenty thousand ringgit and not more than one hundred thousand ringgit or imprisonment for a term not exceeding six months or to both.

B.    Surcharge on transfer pricing adjustment

Under the current transfer pricing regulation regime, a penalty is only imposed where an adjustment made results in additional tax payable. If it doesn’t, then no penalty may be imposed.

Vide Section 140(A) (3C), the amendment proposes a 5% surcharge be levied on transfer pricing adjustment made, regardless of whether or not such adjustment results in additional tax payable.

(a) the economic substance of that transaction differs from its form; or

(b) the arrangement, viewed in totality, differs from those which would have been adopted by independent persons behaving in a commercially rational manner.

The Director General may make adjustments to such transactions as if they were carried out at arm’s length.

A.    Remission of Tax Penalty

B.    Revision of the retention rate by the acquirer

A.    Digitalisation of the stamping process

B.    Remission of Stamp Duty

A.    Change in definition of “chargeable income” 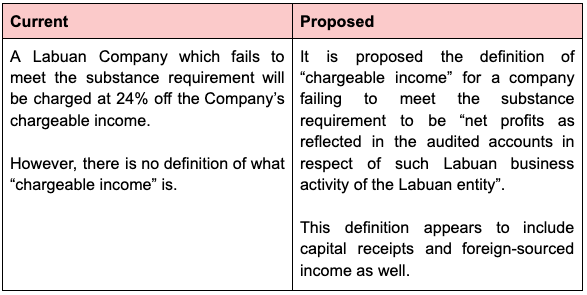 B.    Control and management for non-trading Labuan entities

A Labuan company must satisfy the substance requirement (i.e. number of employees and operating expenditure) to enjoy a preferential tax rate under the Act.

However, there is an added requirement for Labuan entities carrying out non-trading activities, i.e. a pure equity holding company, that must meet the control and management test which is to be prescribed by the Minister.

I am lawyer-turn-consultant writing about the latest tax changes in Malaysia. Pretty much the most dynamic scene in any law in Malaysia. Talk to me about tax at choycaiying@gmail.com. View all posts by Sophia Choy